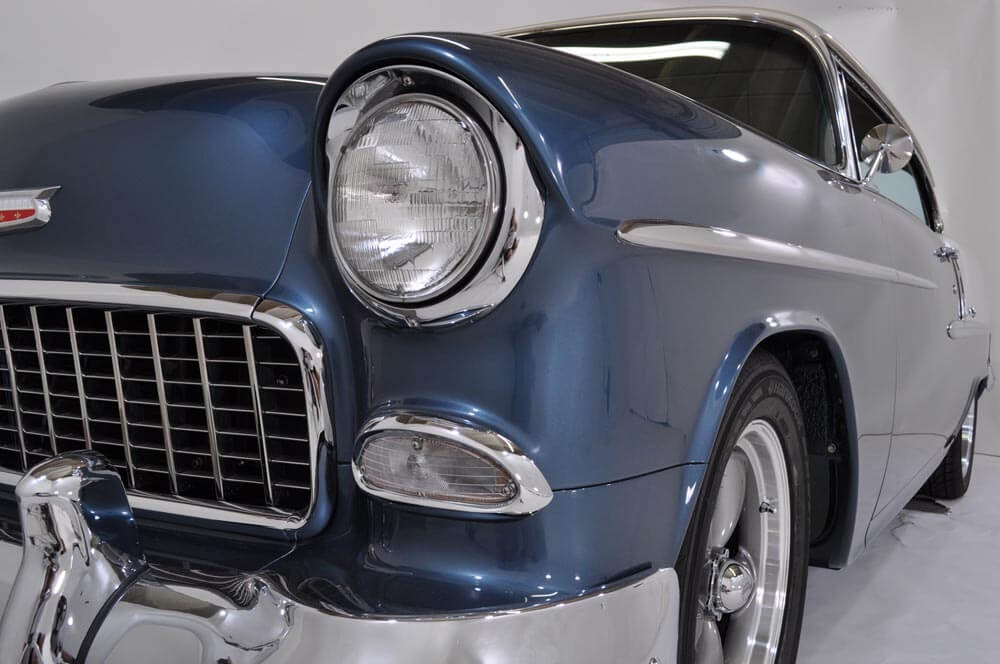 When Paul’s BelAir arrived at Kidd Darrins It was in pretty rough shape. Paul had owned the car for many years and actually drove it for many miles. Fixing it as he drove it, the car was in Paul’s words “not a very nice car to drive”. But it was his passion as he bought several parts cars through the years in order to swap parts onto his ride to keep it rolling. As time passed he finally decided to build the car into what he had always dreamed it should be. And Paul has assured us, we certainly did his old ride proud. This Chevy has it all. From A/C, power windows, power rack and pinion steering, power brakes, weld in traction bars, four wheel disc brakes, and a brand new ZZ4 crate motor. Only the old reliable 4 speed remains as Paul lovingly rebuilt it himself into top condition. Paul was on board for a complete interior upgrade to bring his old ride into the modern era but with the important touches that leave you with that ’50’s flavor. The car remains stock in sheet metal and trim. Yet the upgrades have brought this car into the 21st century without sacrificing the aura of the ’50’s cars we all love to recall.

A classic look for a classic icon in a classic Florida setting.

Underneath the car was so nice and original we merely freshened it up.  We added the upgrades that would have the biggest impact on drivability.  New leafs, added sway bar, disc brakes, welded in traction bars, and of course all new lines, hoses, and shocks.

No billet necessary.  Just a nice clean layout with everything detailed and tidied up around the new ZZ4 crate motor.

The owner, Paul, built the steering wheel himself by using an old corvette wheel with a plastic rim.  He stripped off the old plastic and hand fitted it with the wood.  We at Kidd Darrins finished it in clear coat with a gold pearl added.  What a super compliment to our custom hand built interior design.

Interior redesign includes a tilt column, perforated buckskin with platinum surrounds on the seats. Since Paul also owns a mid ’60’s Corvette we incorporated the side cove design cues of those cars into the door panels of his BelAir.